My first attempt to get better tears, ears, and loaf aesthetics is to determine if the skin of the dough created by the proofing container changes whether it is cloth lined or not.  I have bannetons as well as some other containers that I use to make loaves. Sometimes I just dust a cloth with flour and use that (although I probably need stiffer clothes to do that for real.  I sometimes get ears but mostly don’t.  This experiment is to look at whether there is a measurable difference in the loaves by comparing one proofed with lining an one proofed directly in the container.  Ideally I would be doing this with identical containers, but since I only have one of each oval and rectangular that will have to do.  My hypothesis is that not using the liner will make the skin slight thicker since it won’t retain as much moisture and therefore I will get more tearing and ears (the good kind) without it.

My recipe is the standard Tartine Country Loaf Recipe.  I’m making one full batch which makes two loaves about 1 kg each.  Normally I prefer to make smaller loaves, dividing it into quarters instead of half after the first bulk fermentation.  I try to form both loaves approximately the same way, and cook them about the same times.  The proofing baskets themselves look like this: 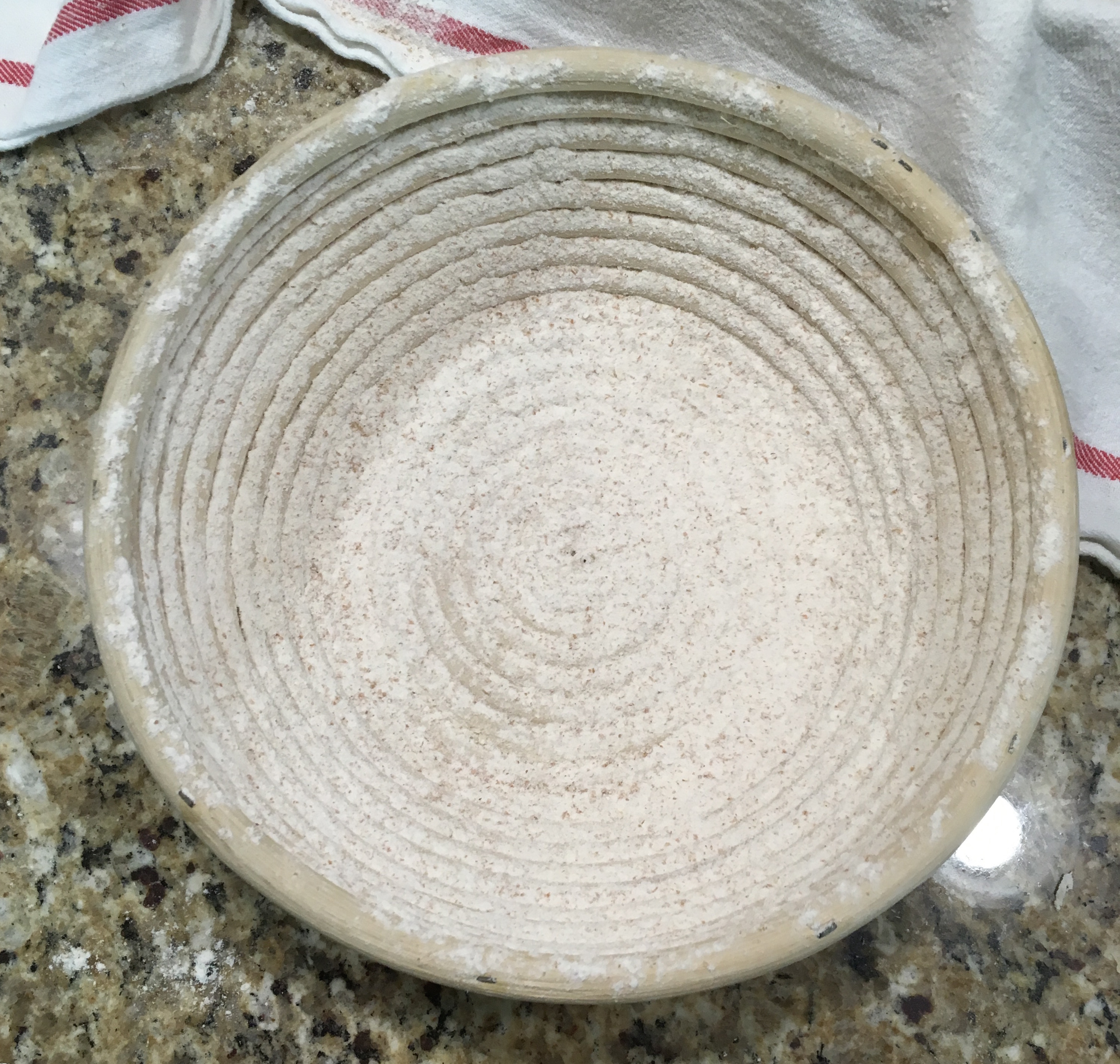 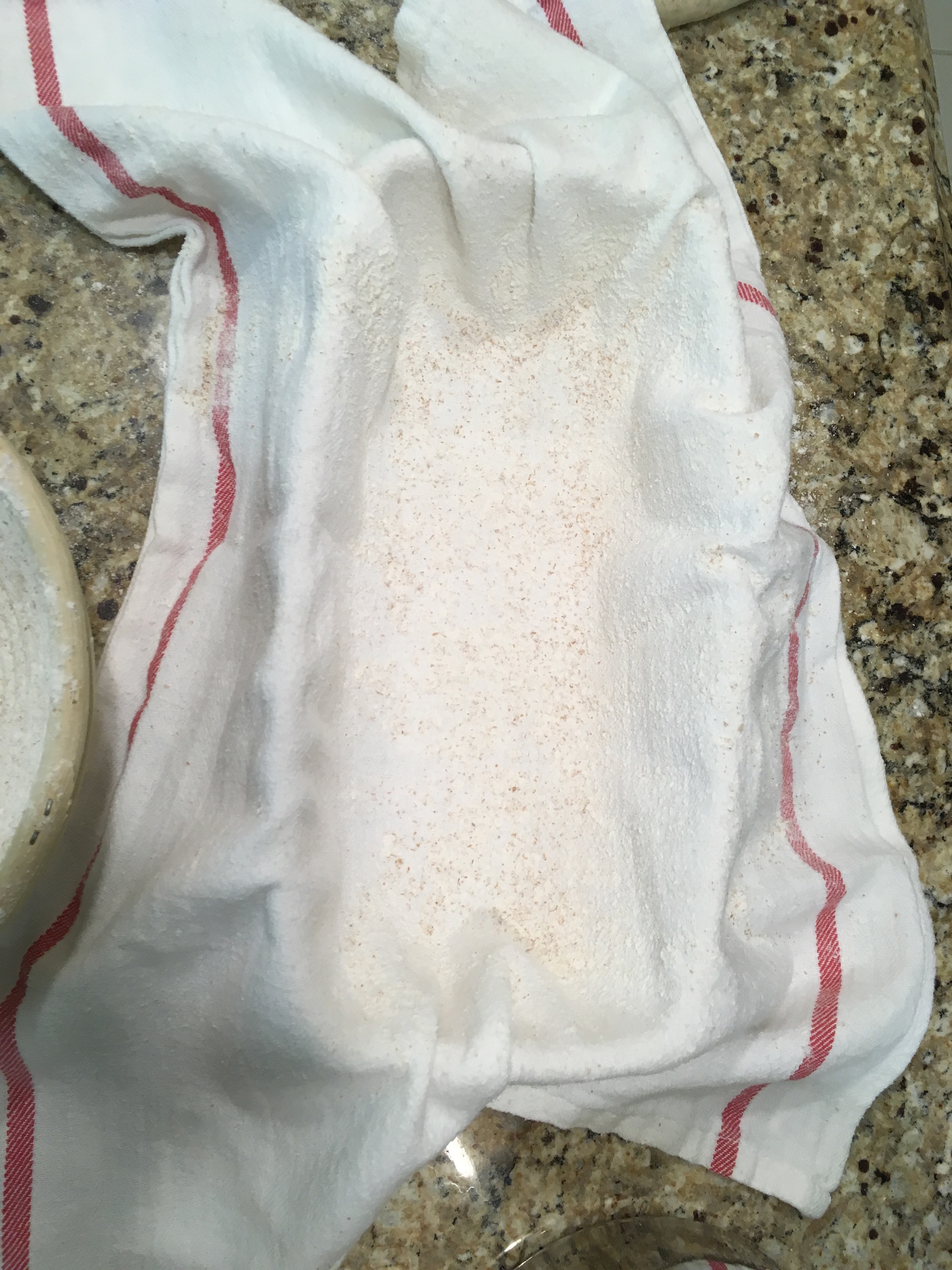 Again, ideally I would have two identically shaped proofing baskets/vessels/containers, but this is what I came up with so far.  I do have multiple bread pans but not they are the kind you bake in or line not proof in and pop out.

Using the traditional Tartine timings of a 40 minute autolyse cycle, 3 hour bulk fermentation, 30 minute pre-forming rest, and then 3-4 hour final proofing I put these loaves in for baking at the beginning of the 3 hour window.  I do a poke test to see if they bounce back in order to test if they are under proofed or just perfectly proofed.  AT my kitchen temperatures around 70-72 degrees it took about three hours, which is pretty typical.  You can see right after forming I had two pretty solid balls of dough of about equal size.  If they were going into identical containers I would have been more anal retentive about making sure they were the exact same weight: 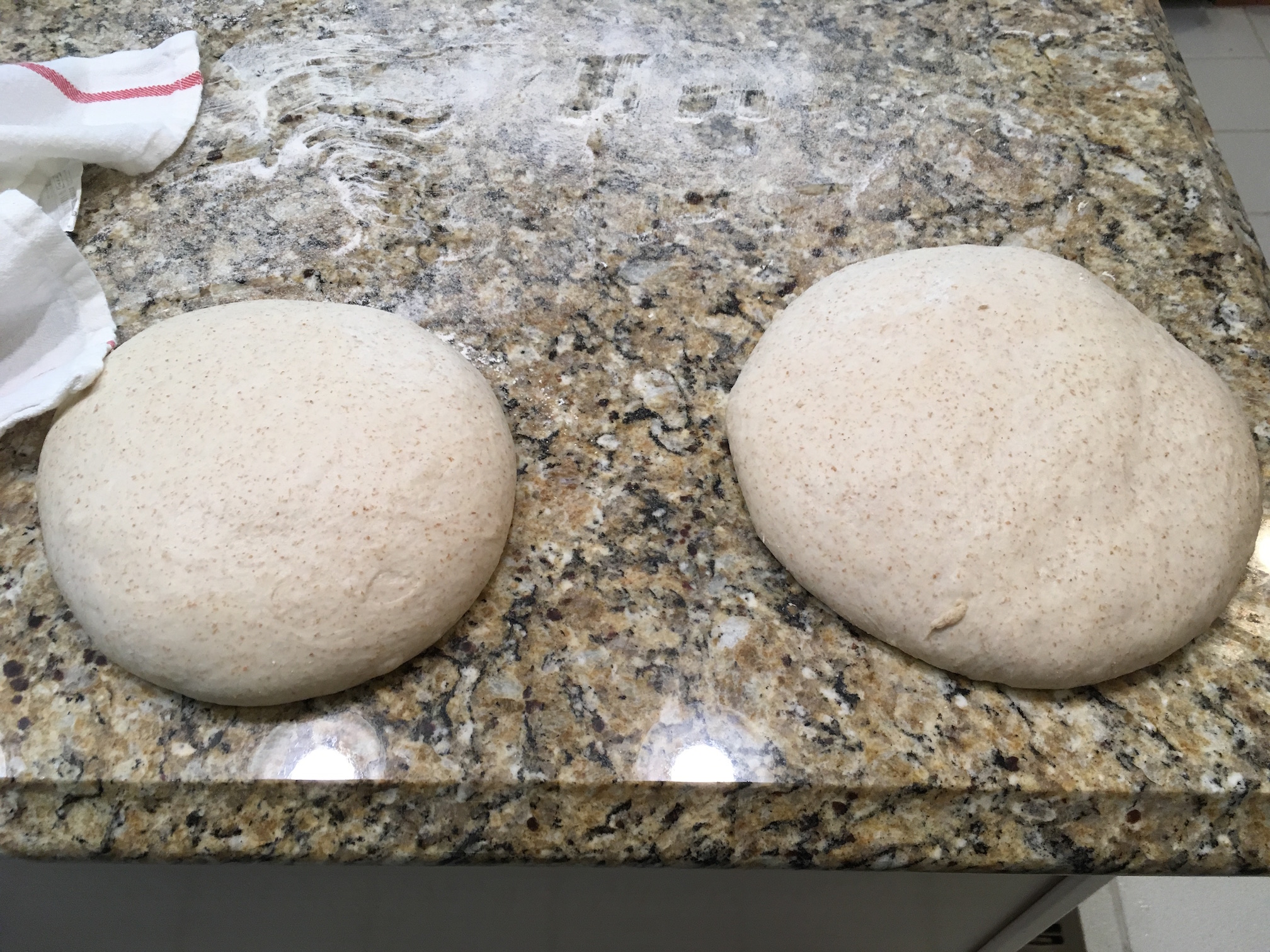 Slashing/scoring is another thing that can adjust the results so here are the two loaves just after scoring with a lame right before being put in the oven: 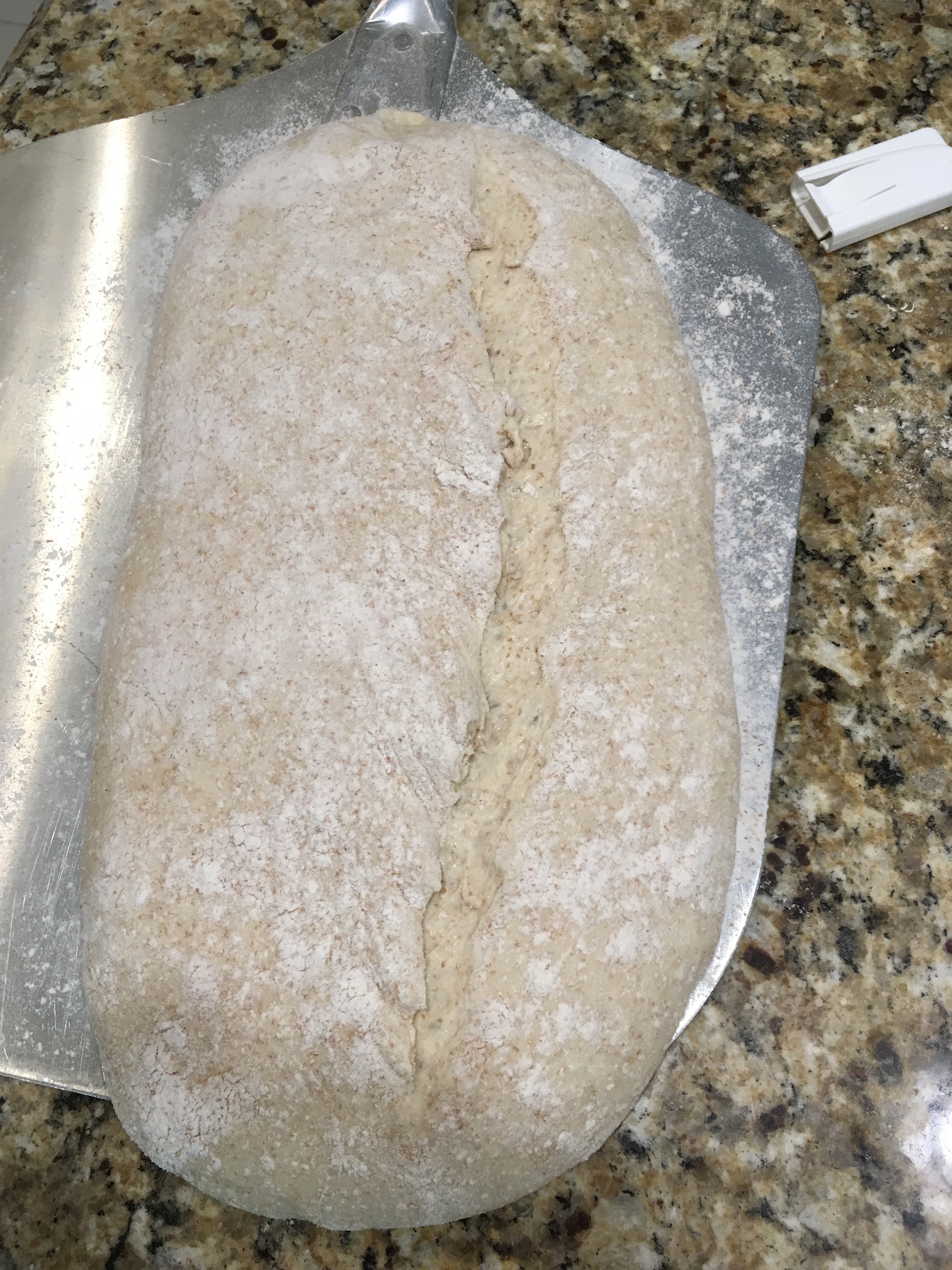 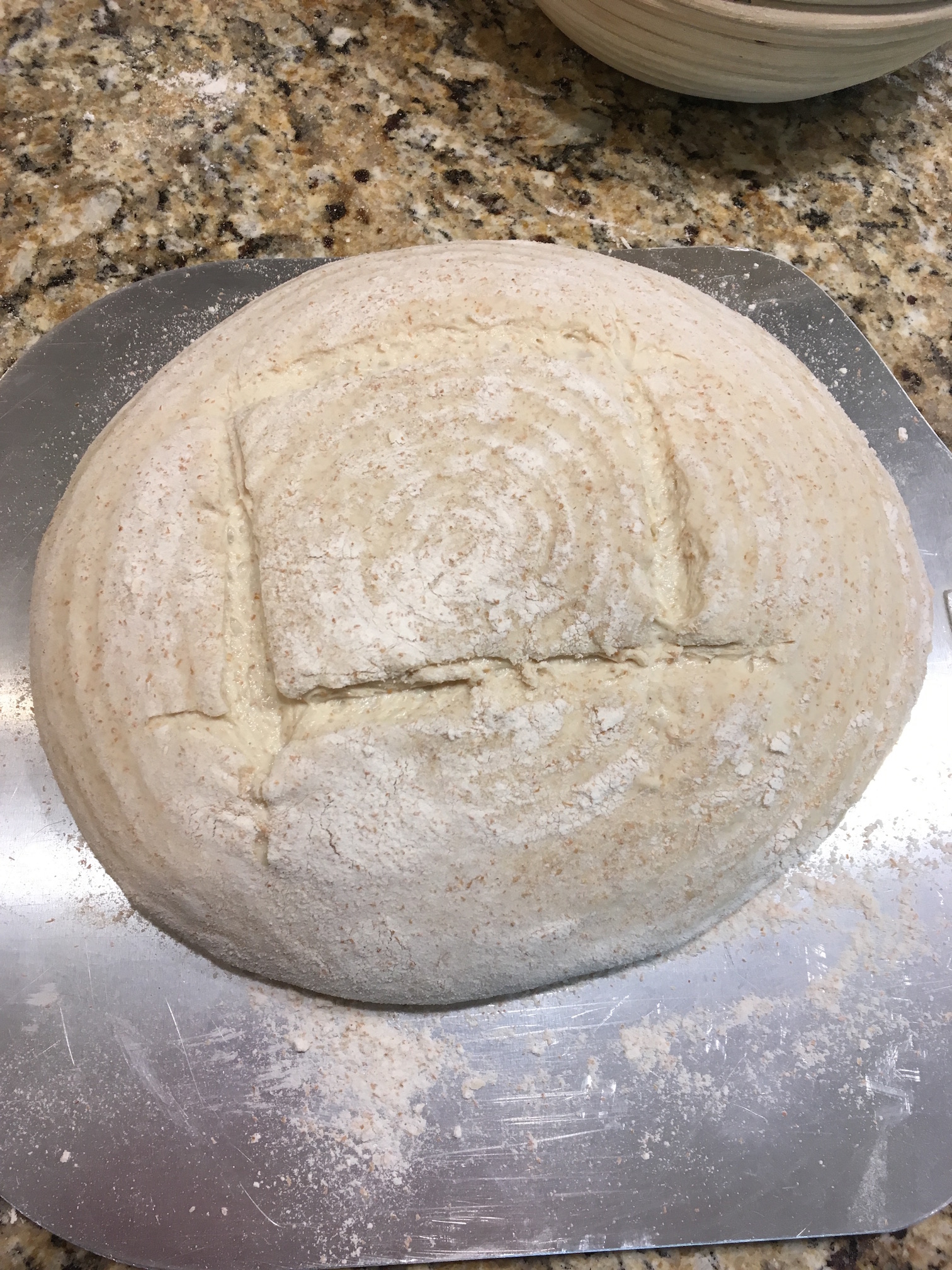 And here are the results.  The rectangular loaf which was proofed in the lined banneton came out looking superb: 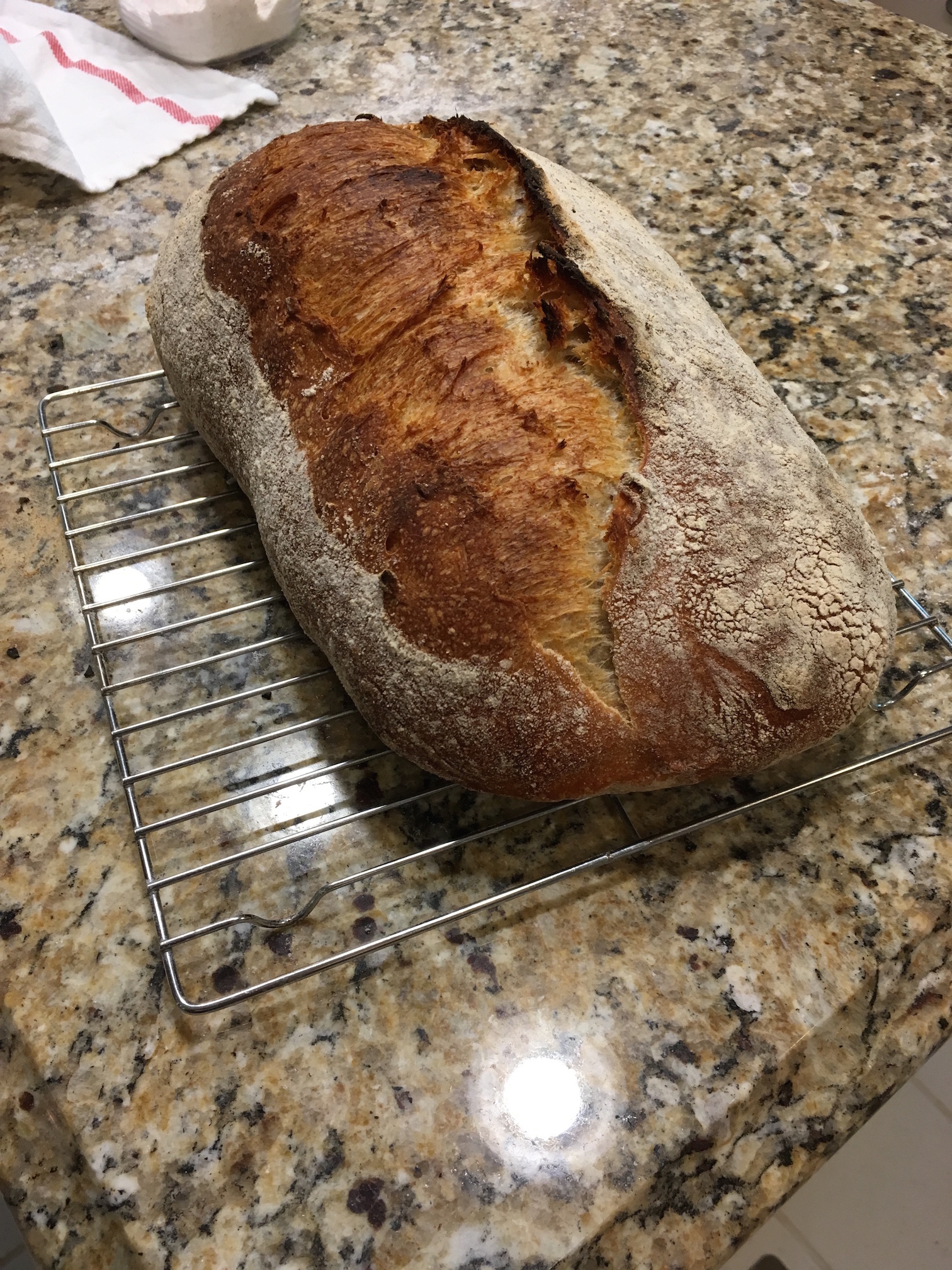 I did put it in the oven length wise, and forgot to flip it so I did get a little over cooking on one edge (the far edge), and I forgot to turn the steaming oven phase down from 500 so it got a little more brown during that phase but overall I’m very please.  On the boule loaf that was proofed in the unlined proofing basket, however I had more mixed results: 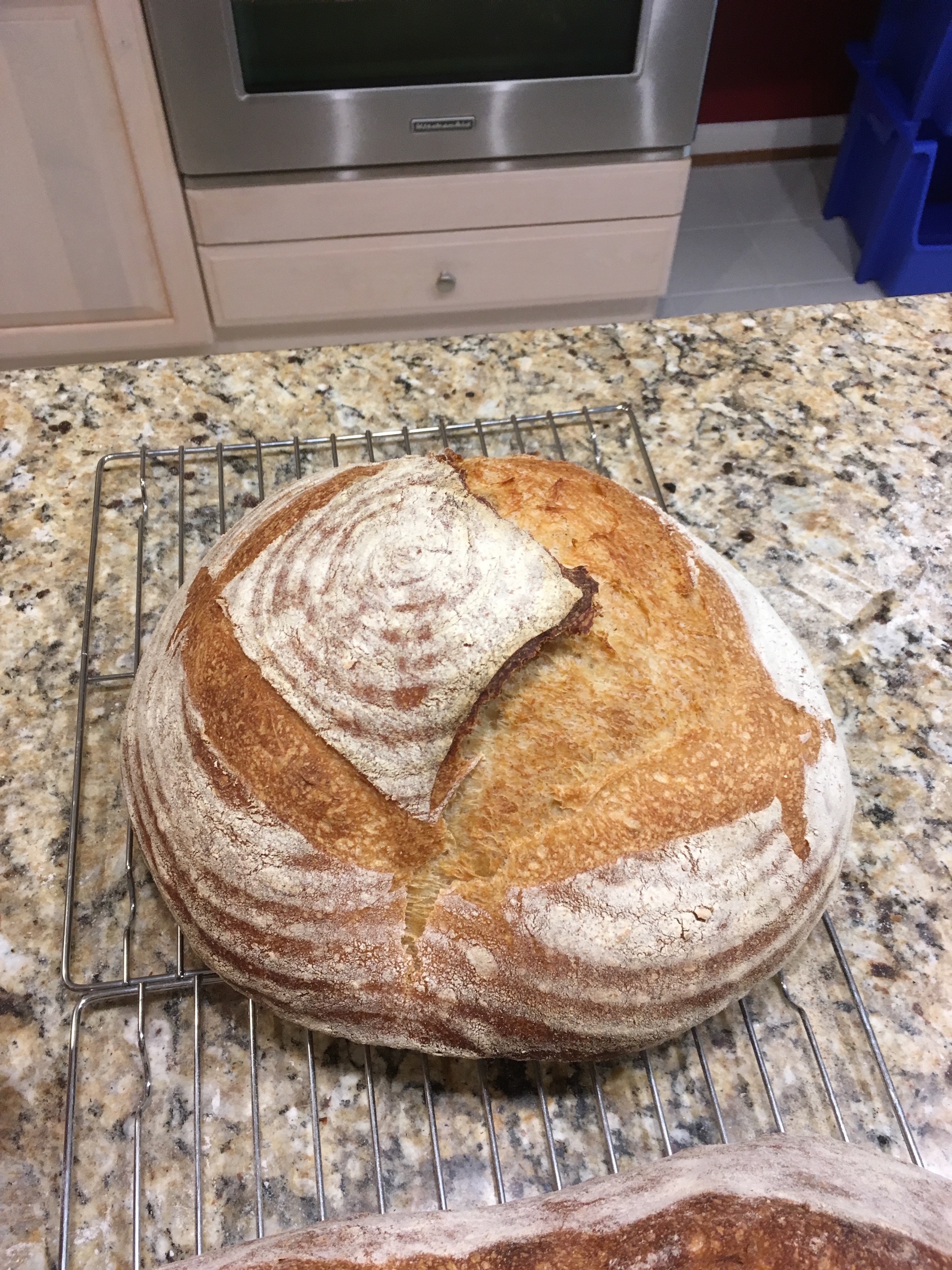 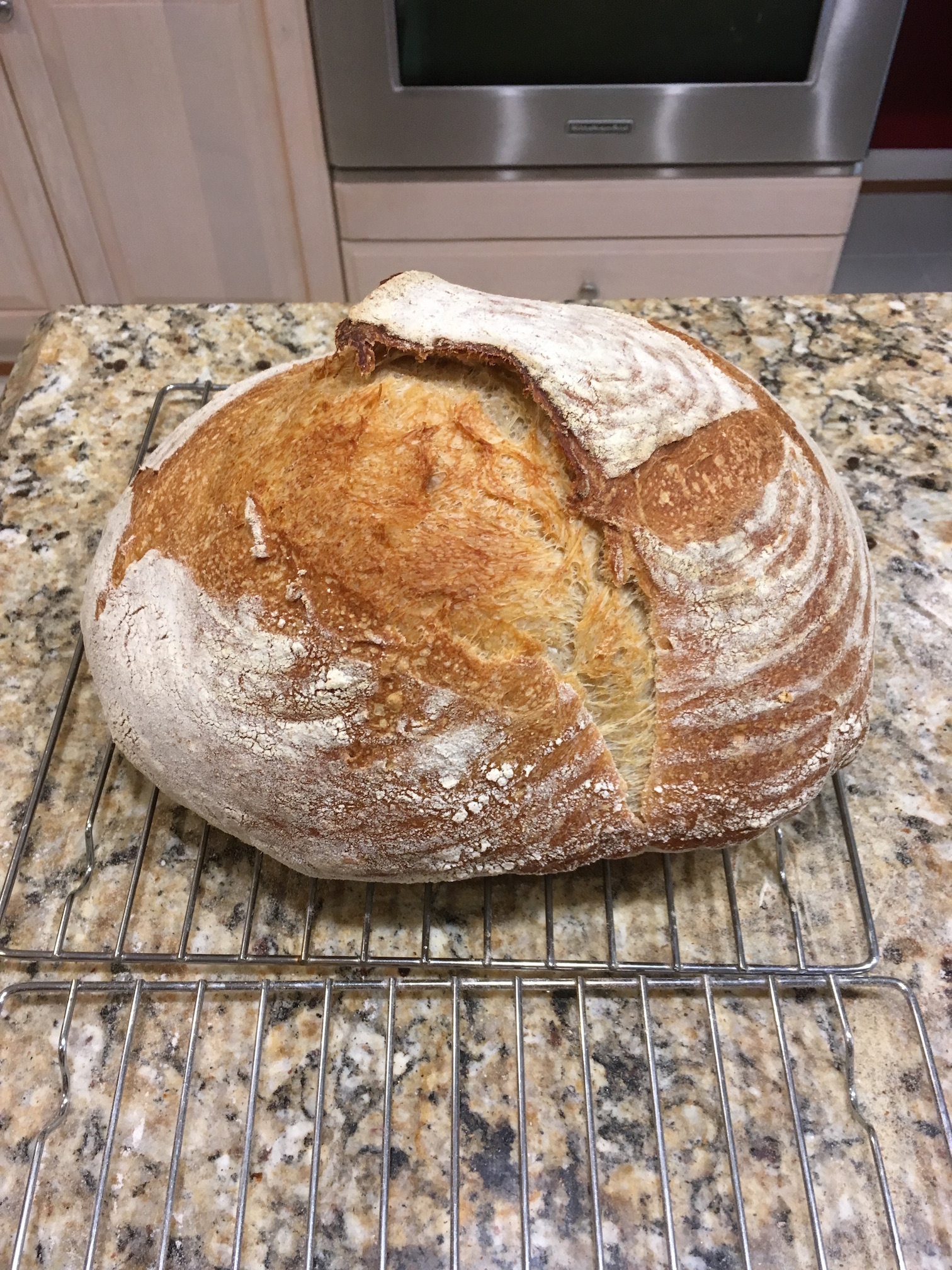 The good is that I still got tearing during the baking process.  However either because I didn’t slice it well, or there was some uneveneness in an air pocket, I got a blow out on one side of it.  However when you look at the crumb on the inside of both loaves they do look pretty uniform and spot on: 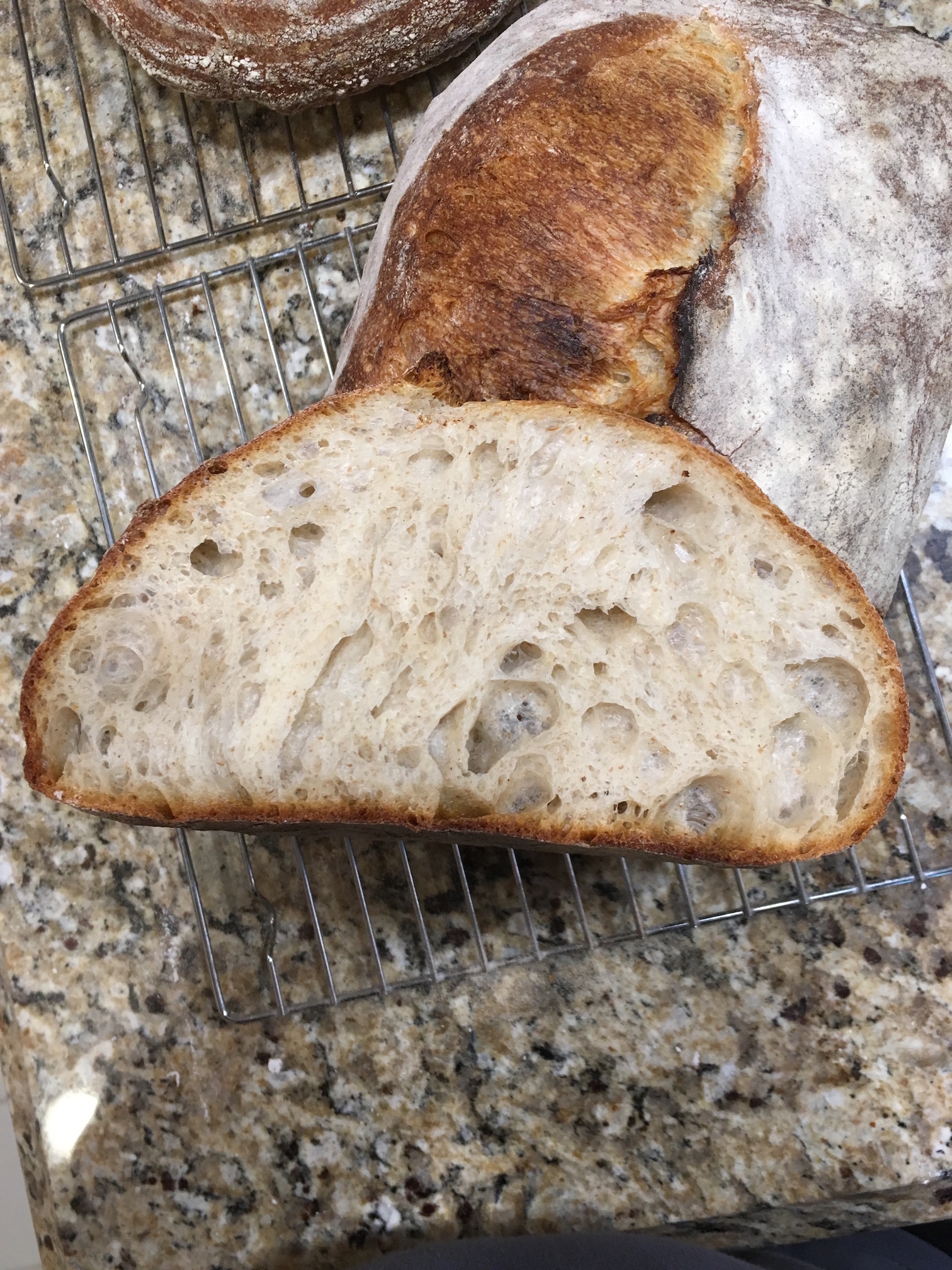 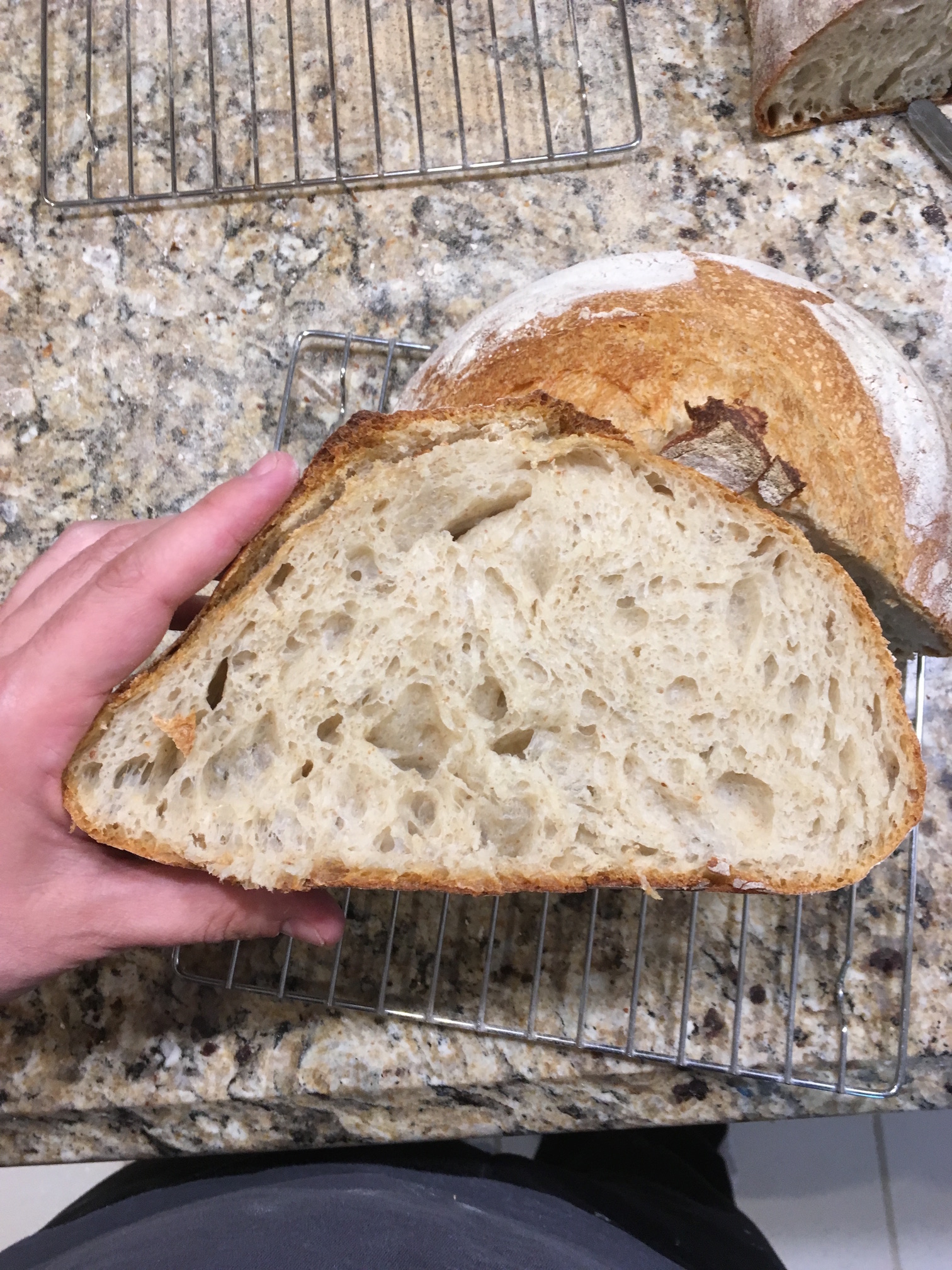 Since this whole process started because I can’t get good tearing on my loaves I was hoping for a little more dramatic difference between the two.  Ironically the lined banneton proofing basked loaf turned out better than the unlined one.  What is the big difference between what I usually bake and now ? The biggest difference would be the size of the loaves.  For the way I eat the bread having 1 kg loaves doesn’t make any sense.  I therefore often make loaves half that size.  These proofing vessels therefore may just be too big for that size loaf, or at least too big to give me the ears I want.  The next experiments will be to look at various proofing vessel shapes and sizes to see if there is some consistency to the differences between them.