I’ve built up a lot of narrative in the past couple of years about why my body composition estimates went from being spot on to diverging rapidly.  I presented the graph of my estimated body weight change against my actual in my 2014 recap. 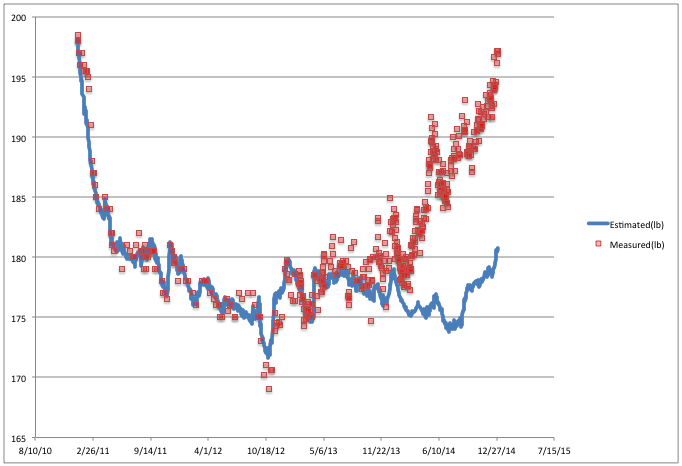 I have had lots of theories but it seemed to correlate well with my marathon training starting up. I’ve been asking if I had “broken my metabolism” or if there may be something else going on.  My weight loss from the 80/10/10 experiment exceeded my projections by several pounds as well.  Maybe I had overcome inflammation that I had created.  Or something to that effect.

Lots of narrative around the correlation, but was it really causation?  This week I was looking at the projections of my weight gain over the past several months, planning for my weight loss tracking for this new experiment.  I was pleased to see that I was spot on in my projections.  Then it occurred to me, I hadn’t been updating my activity levels in my tracking software since November and I had really only been using my FitBit to track sleep most of the time in the September and October time frame where I had those inputs.  So that means that I had taken the FitBit out of the equation and now everything was tracking great again.  Could the obvious problem not have been inflammation or broken metabolisms but that the FitBit is chronically overestimating my calorie estimates?